skip to main | skip to sidebar

Margaret and I have combined our blogging powers and now have a superblog at www.clargaret.blogspot.com

Sorry for making everyone delist the separate blogs and relist the new blog. But we hope it will be worth it.
Posted by Scrivener at 9:43 PM No comments:

We are at the point in this pregnancy where we are slightly worried that we haven't got a proven frontrunner in the name race. We don't like to have a name picked out that we call the fetus because we're afraid we might get sick of it or associate the name with those alien-looking ultrasounds. Yikes. But it would be nice to have some ideas from my limited, but brilliant, blog readers. Here are our criteria:

It can't be too common. He really should be the only one in his class with his name. No Johns, no Steves, not even semi-common names like Aidan or Hunter or Simon or something.

No overtly old testament names. It sounds funny with the Proffitt after it. Elijah Proffitt or whatever just doesn't work.

We like Jewish names, Russian names and literary names but subject to the common rule and they can't be too harsh sounding (No Chaim).

Seemingly awful names will be considered for at least middle names. We need to find the next generation's version of "Elva" - Margaret may complain about her middle name, but she secretly loves it.

So stop hording all the good names like you're hamsters and surrender them to us like you're French. We will be grateful like your annoying roommate at testimony meeting.
Posted by Scrivener at 8:39 PM 5 comments:

Jannalee mentioned that my blog postings have really slumped since I got out of school. The suggested reasoning is that I no longer had any studying to avoid, so I didn't get around to blogging as often. So you should expect a flurry of blog posts here now that my bar review class has started. Regular law school reading was downright fascinating compared to studying for the bar. Ugh.

Bar review coincided with the releasing of our final grades. I was pretty burnt out by the end of this third year and had stopped going to most of my classes in February, so I was pleasantly surprised by some of the results.

I have no idea what could explain the discrepancy. I'm typically much more burned out on school during the spring semester and the weather is also much nicer in the winter and early spring so I have more incentive to ditch classes. My job status and law journal work load were pretty consistent across fall and spring terms and the moot court work-load is actually much more intense during the spring semester. I would say the professors are just more likely to give good grades going into the summer, but I think I'm unique in at least the size of the disparity. I do get quite a bit fatter in the spring - maybe the extra calories work on my brain. Or not.

Another disturbing aspect of all this is how I could score 10 full points above the enforced median in classes I had completely written off. I was DONE this semester. Maybe law school should be shortened to 2 years with a 1 year residency requirement after graduation. Or maybe they should just offer classes in the spring.
Posted by Scrivener at 11:01 AM 1 comment:

1. Non-lawyers are only allowed to make lawyer jokes if they (the jokes) are clever. Lawyers can make non-clever lawyer jokes because we are lawyers - you can't really think any worse of us. (see, that wasn't very clever, but you don't think worse of me because I'm already a dirty lawyer)

3. If you place an ad on craigslist, YOU ARE ONLY ALLOWED TO CAPITALIZE WORDS YOU WANT TO EMPHASIZE. ENTIRE POSTINGS IN CAPITALS ARE UNACCEPTABLE.

4. Television habits have achieved sexual proclivity status. You're into what you're into and whatever you do behind closed doors is between you, your spouse and God. No one is allowed to criticize someone else's TV show preferences, unless they don't like Cash Cab. You don't have to think it's the best show ever, but you have to at least mildly enjoy a New York cabbie picking up random people and asking them trivia questions for petty cash.
Posted by Scrivener at 11:34 AM 2 comments:

I had an amazing break in San Diego for the last few days. My very last four-hour final was on Tuesday afternoon. Margaret and Booker picked me up at school with Dani and we got right on the road after trashing my Federal Income Tax book. It was the first time in years that I didn't have a thing to stress. No school, no papers, no moot court memorials, no Lisa Foundation work, nothing until the Bar exam review course starts on the 28th. We stayed at Bec's beach house until Sunday morning. It was absolutely glorious. Booker posted some good photos on his blog.

One of the highlights came Friday morning. Bec and Joy had found this great little breakfast place that was built into one of those public restrooms that you see on beaches. They had good breakfast burritos, so naturally the place was nicknamed the bathroom burrito place. (And yes, we definitely made some fecal French toast and water closet waffle jokes - I think there was a urinal cakes reference thrown in there as well).

Anyway, we mosey on up to the bathroom Burrito place, when who do we spot packing down a bathroom burrito of his own?: 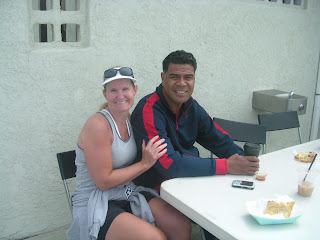 That's twelve time pro-bowler Junior Seau enjoying a crapper coffee. And that's my sister Joy fondling his bicep. I was positive that was him, but I was too chicken to say anything. So I made Joy do it. She asked him if he was Junior Seau (though I think she pronounced it See-ow - when Margaret downloaded the photo she labeled it Junior Sallao), and then let him know what a big fan she is. Classic.
Posted by Scrivener at 9:18 PM No comments:

One of the many decisions you have to make as a parent is what activities you want to enroll/encourage your kids in. Some people sign their kids up for everything and see what sticks, some target something like gym or dance or whatever and some just say they can do whatever they want as long as it's not (insert sport here).

So Margaret and I have a bit of a disagreement and we wanted to see what our blog readers think. I want to get Booker into Boxing as soon as he's old enough and Margaret thinks it's the dumbest idea ever.

For me, I think Boxing is great for kids. It's great for strength, flexibility, and endurance and does a good job of teaching all of those sports things like hard work and competition. It also gives kids toughness and a sense of real confidence. A lot of the Apostles boxed as kids and President N. Eldon Tanner introduced boxing in the school where he taught to "meet the needs of idle youth" Boxing is also good from an injury standpoint. You're much more likely to get hurt in a running sport, especially if there are collisions involved like in football, soccer, hockey, baseball, etc... Really you only have to worry about the occasional broken nose or something.

Some people think Martial Arts or something would work better, but I disagree. Martial Arts often is a lot more dancing and memorizing forms than hard cardiovascular and strength work. Plus there's a certain dork factor there.

Margaret's beef is that it's violent and teaches Booker to hit people, and that "he could get hurt, or his face could get mangled. Plus, have you ever seen Billy Elliot, he could hate boxing and just love dancing." I suppose she's got a point there. That Billy Elliot loved to dance.

So what do we think Blogiverse? Healthy athletic activity, or dream-strangling face-mangler?

I'm not sure why, but at some point in a man's life he starts listening to talk radio. I flip through the music stations sometimes, but 90% of the time I'm listening to Jim Rome or NPR.

On my way home from my Environmental law final I was dutifully listening to NPR. They were talking about the lamentable problem of type II diabetes in African American children. They had a guy on who was an activist dealing with this problem - mainly through faith-based initiatives trying to educate the people about healthy lifestyles - a sort of "what would Jesus eat" campaign.

Then they asked the guy what it was that made African American children particularly susceptible to overeating to the point of contracting type II diabetes. You would think that this would precipitate an anti-McDonald's diatribe linking poverty to forcing people to eat cheap, fast food and that those chains that offer that food offer exclusively fatty, unhealthy diets. You'd be wrong.

Instead, this guy said that the reason African American kids are fat is because of a cultural phenomenon that links weight to prosperity. This is possibly the dumbest thing I've ever heard.

This is America. Oprah and Al Roker notwithstanding, we do not view fat people as particularly desirable or successful. If anything we overvalue the absence of fat as a signal of prosperity. Seventeen Magazine does not put fat people on the cover because their audience does not want to be, or read about, fat people.

I also don't think there is some huge culture gap between African American kids and these common American cultural traits. I'll admit that I am not the world's foremost expert on African American culture, but does this guy really think that if you put two pictures in front of African American kids, one of a skinny guy and one of a fat guy and asked which one was wealthier, or better off, or more admirable, that those kids would pick the fat guy? Seriously? Black culture is often criticized for ostentatious displays of wealth, but when's the last time you saw a rapper or something pointing to his gut while making it rain in a music video? Fitty ain't got no belly and Jay-Z says he's "big pimpin' spendin' cheese." - I'm not sure what that means, but I'm pretty sure it doesn't mean "big pimpin' poundin' cheese fries."

It ended up totally changing my mental picture of the speaker. At first I some him as a middle aged black man - a black preacher type. When he said that all black kids in America just want to get fat to show how well off they are, I immediately switched him to an old white guy. You have to be stupid, racist, out of touch or all three to really believe that fat kids are strutting around showing off their pudgy opulence.

I was most disappointed that the show's host didn't call him on it, but played right along, at one point asking if maybe some black folks resented that after years of struggle they are now being told that they shouldn't show off their new prosperity. Come on NPR - you're better than that.
Posted by Scrivener at 7:08 PM 1 comment:

Scrivener
Mesa, AZ, United States
If only all politics were local.

People I listen to